Draco Malfoy serves as Harry Potter’s main rival during his time at Hogwarts. He starts the series as a traditional bully but we see him grow as a character as it progresses. Draco and his family were followers of Lord Voldemort but it seemed to be mostly out of fear. Draco ends up playing a major role in every book and movie in the series. We have put together a Draco Malfoy quiz for you to test your knowledge of him. This includes some random trivia about him and questions about his biggest moments. As a result, only the biggest Draco fans will be able to get perfect on this. We have also included some additional trivia tidbits at the end, which we couldn’t find a place for on our quiz. This will be your hub for information about one of the most popular characters in the entire series.

Instructions: All you have to do is answer the trivia questions below and at the very end of the quiz, it will let you know how you did. Make sure to also hit the ‘Continue’ button to move on to the next question.

What was the core of Draco Malfoy's wand made of?

True Or False: Draco Malfoy Was On The Slytherin Quidditch Team During His First Year At Hogwarts

What was the name of the Malfoy Family home, where Draco grew up?

Which animal was Draco Malfoy turned into by Mad-Eye Moody?

Why did Draco Malfoy Become The Master Of The Elder Wand?

Who did Draco Attend the Yule Ball with?

Which shop in Knockturn Alley did Draco put the Vanishing Cabinet in so the Death Eaters could get into Hogwarts?

What was Draco Malfoy's Patronus?

Which of Harry's friends is Draco Malfoy related to? (They are first-cousins)

Who did Draco Malfoy end up marrying?

Here are some more details on the quiz answers (but only read AFTER you have taken the test). This will provide you with some more context on the Draco trivia questions that you got wrong.

1) What did the core of Draco Malfoy’s wand consist of?

Draco’s wand featured a core of unicorn hair and also included hawthorn wood. We know this because Harry Potter ended up gaining control of Draco’s wand and it was identified by Ollivander as being “reasonably pliant”.

2) True Or False: Draco Malfoy Was On The Slytherin Quidditch Team In His First Year At Hogwarts

This is false as Draco didn’t join the Slytherin quidditch team until his second year, where he became the seeker. This was also one year after Harry Potter became the seeker for Gryffindor.

3) What was the name of the Malfoy Family home, where Draco grew up?

Draco grew up at the Malfoy Manor, which ended up becoming Voldemort’s headquarters. Harry, Ron, and Hermione all ended up being taken to Malfoy’s Manor after being caught by some snatchers.

4) Which animal was Draco Malfoy turned into by Mad-Eye Moody?

Draco was turned into a ferret by Mad-Eye Moody during, who was really Barty Crouch Jr. in disguise. This was a punishment for Draco attempting to attack Harry Potter from behind. Professor McGonagall ended up reversing the spell and she told Moody thar Transfiguration should never be used as a punishment on a student.

5) Why did Draco Malfoy Become The Master Of The Elder Wand?

6) Who did Draco Attend the Yule Ball with?

Draco attended the Yule Ball with Pansy Parkinson, who was his girlfriend during his time at Hogwarts. Draco didn’t end up marry Pansy though as you will see in a later question.

Draco put the Vanishing Cabinet into Borgin and Burkes, which allowed several Death Eaters to get into Hogwarts. As a result, this led to the infamous Battle of Hogwarts, where many witches and wizards died. A fun fact is that Tom Riddle worked at Borgin and Burkes for a few years after graduating from Hogwarts.

8) What was Draco Malfoy’s Patronus?

Draco was actually never able to use the Patronus Charm in the books or movies. As a result, the answer is never. He simply never learned how to properly use the spell and JK Rowling has never said in either the books or interviews that he ever learned to produce one.

9) Which of Harry’s friends is Draco Malfoy related to? (They are first-cousins)

Malfoy and Nymphadora Tonks are maternal first cousins. This comes as a result of Draco’s aunt, Andromeda Black, marrying a muggle named Ted Tonks. Malfoy is also distanly related to Sirius Black and the Weasley family through this connection.

10) Who did Draco Malfoy end up marrying?

Draco married Astoria Greengrass, and they have a son together named Scorpius Malfoy. In the epilogue scene, Astoria is played by Jade Olivia, who happened to be Tom Felton’s real girlfriend at the time. Her character plays a bigger role in Harry Potter and the Cursed Child. I recommend checking that out if you are interested in learning more about her.

Here are some extra tidbits that we couldn’t find a place for on our Draco Malfoy quiz. This includes some extra stuff about Tom Felton, the naming of the character, and more.

Behind The Name Of Draco Malfoy

Here are some more details about the name of the character and the inspiration behind it.

1) In an early draft of Harry Potter and the Philosopher’s Stone, Draco’s last name was originally going to be ‘Spungen’. On Pottermore, it was revealed that ‘Smart’ and ‘Spinks’ were also considered as Draco’s last name in early drafts. None of these ended up sticking and Rowling decided on ‘Malfoy’ instead. I think that most of us will agree that she made the right choice.

2) In French, ‘Malfoy’ translates directly to ‘bad faith’ or ‘evil belief’. This was intentional on the part of JK Rowling as the Malfoy Family serves as the villains for most of the series. The family also does some have evil beliefs, which includes their value of blood purity. As a result, the last name suits the family pretty well.

5) Scorpius Hyperion Malfoy (Draco’s son), is also named after a constellation, ‘Scorpius X1’. ‘Hyperion’ is also one of Saturn’s moons. As you can tell by all of this, Rowling had a lot of inspiration from Astronomy when writing Draco’s character.

Behind The Character Of Draco Malfoy

Here are some additional tidbits about the character that we found interesting but couldn’t find space for on our Draco Malfoy quiz.

6) JK Rowling revealed in an interview that the character of Draco is loosely based on a few bullies that she encountered in her childhood.

7) There was a fan theory for a few years that Draco might be a werewolf who was bitten by Fenrir Greyback. JK Rowling took to Twitter to shoot down this theory and say there was no validity to it.

8) JK Rowling has said that she was surprised at how many girls fell in love with the Draco character. This is because he is supposed to be a villain and bully but is treated like a heartthrob among some Potter fans. Rowling has joked that she blames Tom Felton for making fans fall in love with Draco.

9) According to Pottermore, Draco’s birthday is June 5th. This gives him the same birthday as Mark Wahlberg, Ninja, and Pete Wentz.

10) Rowling stated in an interview that Draco was skilled in Occlumency, which is something that Harry Potter was no able to master. She views Draco as someone who was always skilled at “compartmentalizing” his life.

11) Despite being enemies, Draco and Ron Weasley are actually distant cousins.

12) Draco’s middle name is ‘Lucius’ after his father.

13) Rowling has compared Draco to Regulus Black, saying that they are both initially drawn to becoming Death Eaters but found out that it was much more than they could handle.

14) Draco can also be compared to Dudley Dursley as they both bullied Harry for many years but later reconciled with him. They were also both only children and grew up spoiled.

Behind The Actor, Tom Felton

Here are some additional tidbits about Tom Felton and the casting of the role of Draco.

15) Tom Felton revealed in an interview that he auditioned for the roles of Harry Potter and Ron Weasley. Felton didn’t end up getting either role but producers thought that he would be perfect for the role of Draco. He has also mentioned that he is grateful he didn’t get either the roles of Ron or Harry as his life would have been much different.

16) Tom Felton revealed on Twitter that he took the Pottermore quiz and he was sorted into Gryffindor house. JK Rowling responded by saying that she could have let him know that years ago but didn’t want to kill his motivation.

17) Tom also took the Pottermore quiz to find out his Patronus and ended up getting a ragdoll cat. As mentioned in our quiz, Draco does not know how to cast a Patronus Charm as he never learned it.

18) Felton was banned from tanning for the 10 years of filming the Potter movies. This was because the producers wanted him to keep his pale complexion for the role of Draco.

19) During an interview with Yahoo, Felton revealed that a crazy fan legally changed his name to Lucius Malfoy and wanted to legally adopt him. He kindly declined the offer but it just goes to show you how crazy some Potter fans can be.

20) Felton is one of only 14 actors to appear in every movie in the series.

22) Felton is only one of 14 actors who have appeared in every one of the Harry Potter film. The other ones include Daniel Radcliffe (as Harry Potter), Rupert Grint (as Ron Weasley), Emma Watson (as Hermione Granger), Matthew Lewis (as Neville Longbottom), Bonnie Wright (as Ginny Weasley), Robbie Coltrane (as Rubeus Hagrid), Alan Rickman (as Severus Snape), Warwick Davis (as Filius Flitwick), Devon Murray (as Seamus Finnigan), James & Oliver Phelps (as Fred & George Weasley), Josh Herdman (as Gregory Goyle), and Geraldine Somerville (as Lily Potter).

23) Rowling has also revealed that Tom Felton is one of the “Big Seven” who she refers to in private. These are the seven actors/ characters who she considers the core of the entire series. The rest are Daniel Radcliffe (Harry Potter), Emma Watson (Hermione Granger), Rupert Grint (Ron Weasley), Bonnie Wright (Ginny Weasley), Matthew Lewis (Neville Longbottom), and Evanna Lynch (Luna Lovegood).

The Impact Of The Draco Character

Here are some additional tidbits about the impact of the character.

24) Rowling uses Draco Malfoy as a way to introduce racism into the story. Throughout the series, he calls Hermione a “filthy mudblood” and looks down on others who aren’t purebloods like his Family. This is a prime example of how some people in society judge others based on their skin color and social standing. It is actually a pretty clever way from Rowling to introduce themes of racism into the story and teach younger readers that it is a bad thing. In the context of the storyline, Draco is the one who teaches Harry Potter that all Wizards and Witches aren’t all good.

25) The character inspired the creation of a band called ‘Draco and the Malfoys’. The band performs songs from the perspective of Draco.

26) Draco was ranked 8th on IGN‘s list of the best Harry Potter characters of all time.

How did you score on our Draco Malfoy quiz? Let us know in the comment section below and share it with your friends to compare your knowledge of the character! Also, make sure to let us know your favorite moment or quote of his from the series! I was a big fan of Draco’s character development throughout the series. He starts as someone we all hate but you can later empathize with him for how scared he was of Voldemort. 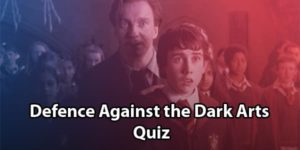 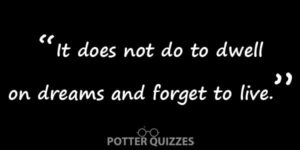