Which Harry Potter house are you? If you have ever asked yourself this question, you have come to the right place. We have put together a personality quiz that will let you know the Hogwarts house that you would be sorted into if you attended the school. Are you a Gryffindor like Harry Potter, Hermione Granger, and Ron Weasley? Are you a Hufflepuff like Cedric Diggory, Newt Scamander, and Nymphadora Tonks? How about a Ravenclaw like Luna Lovegood, Gilderoy Lockhart, and Cho Chang. Or, are you a Slytherin like Draco Malfoy, Severus Snape, and Horace Slughorn? Take our Harry Potter house quiz and find out where you would fit! We have also included some additional trivia about each of the great houses at the end of this page.

Which Harry Potter House Are You?

Instructions: All you have to do is answer the 25 sorting hat quiz questions below and we will give you a result at the end. It will automatically move you on to the next question after you select your answer. There will also be social sharing buttons at the end so that you can easily share your result with your friends.

Want More Than Just A Harry Potter House Quiz? We Have Put Together Some Additional Trivia About Each Of The Great Houses

We have included some traits about each of the houses that you could be sorted into. This includes some popular characters from the series who are in each house and the celebrities who have revealed their allegiances. This is where you will find out more details about your Harry Potter house quiz result.

Members of Gryffindor are typically extremely brave, daring, loyal, and chivalrous. This is the most popular house as it features most of the top characters from the series like Harry, Hermione, and Ron. Naturally, most people want to be sorted into Gryffindor to match some of their favorites characters from the franchise.

More About The Founder, Godric Gryffindor

Godric Gryffindor was said to value courage, determination, and also strength in students that represented his house.

Godric’s Hollow is named after him. This is the village where Harry lived when he was a baby. This was also the place where Harry’s parents were murdered by Lord Voldemort.

Godric was said to be the most accomplished dueler of his time.

Godric and Salazar Slytherin were originally great friends but they grew apart in their later years.

Which Celebrities Are In Gryffindor?

In a surprising Twist, Draco Malfoy actor, Tom Felton, revealed that he is actually a Gryffindor. He Tweeted: “Today was the day. I finally did it. I joined Pottermore and was sorted into……..Gryffindor. Heart broken x #slytherinforlife”. JK Rowling responded by saying that she could have told Tom that years ago but didn’t want to spoil his motivation while playing the role of Draco.

Luna Lovegood actress, Evanna Lynch, is a member of the Gryffindor house. Even though Luna is a proud Ravenclaw, Evanna was sorted in Gryffindor as revealed in a Youtube video.

Actor Kit Harington revealed in an interview that he is a member of Gryffindor. He also revealed that he is a huge Harry Potter fan in general. Pretty cool to know that Jon Snow of Game of Thrones would be a Gryffindor.

Actress Margot Robbie has revealed that she was sorted into Gryffindor after she took the Pottermore quiz. Margot also admitted to rigging some of the answers in order to end up in her favorite house.

During an interview, Shawn Mendes said that he thinks he would be in Gryffindor.

Bonnie Wright ended up in Gryffindor after she took a Hogwarts house test. This matches her on-screen character, Ginny Weasley.

Tom Holland found out he was in Gryffindor after taking a test. Holland also noted that he is “obsessed” with the world of Harry Potter.

Andrew Lincoln ended up in Gryffindor after taking a test. He is best known for his role as Rick Grimes in The Walking Dead. He is also the voice of the Quidditch Through the Ages audiobook, which some Potter fans may recognize.

During Daniel Radcliffe’s Reddit AMA, he said that there is no doubt that he would be in the same house as Harry.

Members of Hufflepuff are generally humble, kind, and hard-working. This seems to be the most common house and JK Rowling has said that most “good” people go to Hufflepuff. Members of this house are known to have a strong moral code and a great sense of what is right and wrong.

More On The Founder, Helga Hufflepuff

Helga Hufflepuff was the only one of the Hogwarts founders who didn’t require any special characteristics for students. She also accepted everyone with zero preferences. As a result, this is much different than the other three founders.

According to Pottermore, Helga was very skilled at food-related charms. It is also noted that a lot of the recipes in the Hogwarts kitchens come from Helga.

Helga was responsible for the school using house-elves in the kitchen. This is because it would give them a safe place to work.

Which Celebrities Are In Hufflepuff?

Dwayne ‘The Rock’ Johnson is a Hufflepuff, as revealed by him on Twitter. He Tweeted: “Huffpuffs in the house!”. As a result, he is probably the most famous Hufflepuff in the world.

Eddie Redmayne, who plays Newt Scamander, says that he is a proud Hufflepuff. In a video for MTV’s Youtube Channel, he spoke about Hufflepuff’s being often overlooked and that he is trying to change the stigma.

Probably the most surprising member of Hufflepuff is Ron Weasley actor, Rupert Grint. In a video with Pottermore, Grint took their sorting quiz and found out that he is a member of the yellow and black.

Matthew Lewis took the Pottermore quiz and he was sorted into Hufflepuff. He is best known for playing Neville Longbottom in the Potter movies.

Natalie Dormer took Pottermore’s house quiz and ended up getting sorted into Hufflepuff. She subsequently went on to say that Hufflepuff was not what she was expecting. You know Dormer for her roles as Margaery Tyrell in Game of Thrones and Cressida in The Hunger Games series.

Lana Condor revealed during an interview that she is probably a member of Hufflepuff. She is best known for being in movies like To All the Boys I’ve Loved Before, X-Men Apocalypse, and Alita: Battle Angel.

Members of Ravenclaw are generally intelligent and creative. They are best known for their academic achievements and also for being self-sufficient. Many of the students in Ravenclaw are very competitive, especially when it comes to academic success. As a result, if you love school and learning, chances are high that you are a Ravenclaw. If you are also someone who is very creative, you are a good fit for the blue and bronze!

More On The Founder, Rowena Ravenclaw

Rowena Ravenclaw was said to value intelligence and wisdom when choosing students for her house.

According to Pottermore, a broken heart contributed to her early death.

Which Celebrities Are In Ravenclaw?

In an interview with Buzzfeed, it was revealed that Kelly-Marie Tran (who is best known for her appearance in Star Wars: The Last Jedi), was sorted into Ravenclaw after taking the quiz. She also admitted that she was hoping to be in Gryffindor as it is her favorite house.

Emma Watson (aka Hermione) has never taken a test but many fans believe that she would be in Ravenclaw. This is based on her attending and getting a degree from Brown University.

Jordan Fisher revealed on Twitter that he is a proud member of Ravenclaw. Fisher is an actor, singer, and dancer. He event won Dancing with the Stars in 2017.

Members of Slytherin are generally ambitious, cunning, and resourceful. Many of the members of the house are known to take charge and are strong leaders as a result. A lot of the most powerful Wizards of all time come from this house. While saying that, not every student in Slytherin should be considered evil.

More On The Founder, Salazar Slytherin

Salazar Slytherin was said to have valued those who were cunning, had great ambition, and were pure of blood.

According to Pottermore, Salazar was very skilled at Legilimency (reading minds) and was also the first recorded parselmouth (can talk to snakes).

Salazar ended up getting into a fight with the other founders and decided to leave Hogwarts. There is a great legend that Salazar Slytherin and Godric Gryffindor got into a big duel prior to him leaving the school.

Which Celebrities Are In Slytherin?

On Twitter, Ariana Grande revealed that her Pottermore quiz result told her that she belongs in Slytherin house. As a result, she is easily the most famous member of Slytherin (in the real world).

Lin-Manuel Miranda admitted in an interview with WIRED that he took the quiz and it told him he is a Slytherin.

During an interview with Vanity Fair, Daniel Radcliffe (aka Harry) said that he thinks Kanye West would be in Slytherin.

Where did you get placed in our Harry Potter House Quiz? Let us know who you got in the comment section below and make sure to also share this with your friends! Also, if you know of any other celebrities that belong to a certain house, get into contact with us and we will add them! 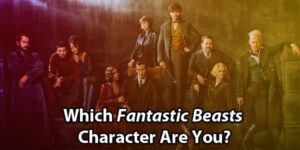