What would your job be in the Harry Potter Universe? Take our Harry Potter career quiz and we will let you know the job that you would have in the Wizarding World. Possible results include Auror, Curse-breaker, professional Quidditch player, and more.

What Would Your Career Be In Harry Potter?

Instructions: Just choose your answer and it will automatically move you on to the next question. After answering all of the questions, it will give you a result. There are also social sharing buttons at the very end so that you can easily share your results with your friends.

List Of The Wizarding Careers That You Could Have Gotten

Here are all of the potential jobs that you could have gotten on our quiz and also some more details about each of them.

An Auror is someone who serves as a “Dark Wizard catcher”. They essentially are elite police officers who focus on the catching of dark Witches and Wizards. This is a career choice that takes excellent grades and you also have to pass multiple tests about your character. Some known Aurors include Harry Potter, Ron Weasley, Neville Longbottom (briefly), Kingsley Shacklebolt, and Nymphadora Tonks.

A Curse-breaker is someone who spends their time breaking, removing, and countering curses. In real-life terms, they essentially serve as treasure-hunters. The best-known curse-breaker is Bill Weasley, who worked for Gringotts after Hogwarts.

A healer is someone who uses healing magic to help people who are sick, injured, or dying. They essentially serve as doctors and nurses in the muggle world. The best-known healer is probably Madam Pomfrey, who worked at Hogwarts during Harry’s time at the school.

A Hogwarts Professor teaches a specific subject to young Wizards and Witches. They serve the same role as teachers and professors do in the muggle world. The best-known professors include Albus Dumbledore, Severus Snape, Minerva McGonagall, and Filius Flitwick. You could also be a professor at one of the other Wizarding schools such as Beauxbatons, Dumstrang, and Ilvermorny.

The Minister of Magic is the person who controls the government in the Wizarding world. They essentially serve the same role as Presidents or Prime Ministers in the muggle world. The best-known Ministers Of Magic include Cornelius Fudge, Rufus Scrimgeour, Kingsley Shacklebolt, and then Hermione Granger.

A professional Quidditch player is someone who plays Quidditch for a living. They essentially serve the same role as professional athletes do in the muggle world. The best-known pro players from the series include Viktor Krum, Oliver Wood, and Ginny Weasley.

Diagon Alley is a popular shopping area for Witches and Wizards. A magical shop owner would be in charge of their own specific store that sells magical goods or services. They essentially serve the same role as a business owner does in the muggle world. An example would be Fred and Geroge Weasley, who started Weasleys’ Wizard Wheezes.

A Wandmaker is someone who builds and also sells magical wands for a living. They use different wood and cores to construct wands for Witches and Wizards. In the muggle world, you could probably compare them to woodworkers and also other jobs that construct things. The best-known wandmaker is Garrick Ollivander.

Here are some additional occupations that exist in the Wizarding World but were not included on our quiz.

As we saw with Gilderoy Lockhart, there is a lot of fortune and fame to be made in writing Wizarding books. Another example of a successful writer was Newt Scamander with his Fantastic Beasts and Where to Find Them.

Instead of just studying magical creatures, there is also the role of breeding them. An example of a breeder is Hagrid, who mixed Manticores and Fire crabs together to create the Blast-Ended Skrewt.

Another career that exists is a caretaker, who looks after a specific building. An example would be Argus Filch, who looked after Hogwarts.

A specific brand of Magizoology, which specifically studies dragons. An example would be Charlie Weasley, who is the older brother of Ron.

A darker career in the Wizarding World is the Executioner. They are used to kill magical creatures that are deemed to be too dangerous by the Ministry of Magic. We saw an Executioner in the Prisoner of Azkaban when he came to kill Buckbeak.

A Groundskeeper is responsible for taking care of the land of a specific school or house. This was Hagrid’s role at Hogwarts for many years.

Just like the real world, there were journalists who covered the top stories in the Wizading World for various newspapers. An example would be Rita Skeeter, who works for the Daily Prophet.

The Knight Bus serves as a form of transportation for Witches and Wizards. Fans were introduced to Stan Shunpike (the conductor) and Ernie Prang (the driver).

Another option would be working for the Ministry of Magic in some capacity. There are many different departments and things that you could specialize in. This includes departments such as the Misuse of Muggle Artefacts Office, Broom Regulatory Control, and Committee on Experimental Charms. Pick what you love most about the Wizarding world and you can specialize in it.

Another interesting career would be owning your own Wizarding pub. Examples include The Leaky Cauldron and The Three Broomsticks. In later life, Neville Longbottom married Hannah Abbott, who was the landlady of the Leaky Cauldron.

So, what did you get on our Harry Potter career quiz? Let me know in the comment section below and also on Twitter. 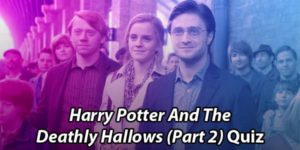 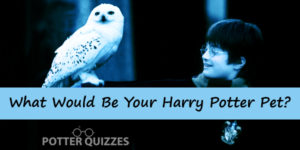